Much has been written about the 1998-2000 “border conflict” between Eritrea and Ethiopia, and various narratives have been produced to effectuate Ethiopia’s expansionist agendas against Eritrea.  Eritrea’s repeated calls for dialogue to resolve the “border issues” were ignored and the irresponsible Prime Minister of Ethiopia boasted “We shall negotiate while we fight and we shall fight while we negotiate” as his regime launched three successive offensives. The regime’s military adventures cost the lives of over 120000 of Ethiopia’s sons who were used as cannon fodder and minesweepers in its aggressive war of invasion and occupation, which employed deadly “human wave” tactics reminiscent of WWI.

As a result of the failure of bilateral talks and dialogue, mediation and war, the international community had no option but to speak with one voice to resolve the disputed or contested border. It was that unified voice that delivered the best, most viable and mutually and legally acceptable solution; respect for the rule of law. The international community through the UN Security Council urged the two parties to respect the rule of law and resolve their border “dispute” through legal and binding arbitration mechanisms. 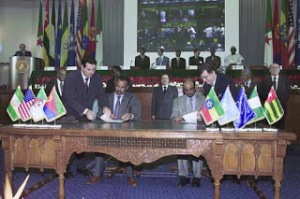 The UN Security Council strongly welcoming and supporting the Peace Agreement between Eritrea and Ethiopia stated the following in its Presidential Statement[1]:

Kofi Annan, Secretary-General of the United Nations and Amara Essy, the then Secretary General of the Organization of African Unity (AU) said that the EEBC Decision was:

On the same day, 13 April 2002,  that the EEBC rendered its Final and Binding decision, the UN Security Council in its Press Release said:

The African Union (AU), European Union (EU), United Nations (UN), and the United States (US), through their respective Press Statements and Releases officially endorsed and confirmed that the Border Commission’s decision was final and binding, and the UN Security Council adapted and endorsed it as such.

Ethiopia reneged on its treaty obligations

The Eritrea Ethiopia border issue was legally resolved and the chapter closed. Therefore, there was no “disputed” or “contested” border or territory between Eritrea and Ethiopia. Ethiopia rejected the EEBC’s ruling and sought to re-argue, appeal, revisit, and revise the decision using many gimmicks and ploys for a period of 5 years.  Using sugar coated niceties such as “dialogue”, “normalization of relations”, “origins of conflict”, “lasting peace” etc. it attempted to hijack the sole mandate of the EEBC to demarcate the Eritrea Ethiopia border, by asking for an “alternative mechanism”.

In its eloquent and clear 21 March 2003 Observations the EEBC said:

To re-argue, appeal, revisit, or attempt to revise the Final and Binding Security Council endorsed decision would not only be a breach of the Algiers Agreement , it would set a dangerous precedence and would encourage the law of the jungle over the rule of law. It would also encourage Bismarck’s concept of “Might is Right”.  No matter how much the minority regime in Ethiopia tried to confuse the international community in general, and the Ethiopian people in particular, there is no “contested” or “disputed” border between Eritrea and Ethiopia and that fact has been consistently ascertained and confirmed by the EEBC.  After waiting for over five years, the EEBC decided to fulfill its mandate by demarcating the border using coordinates on maps-virtual demarcation.

Markers or not, pillars or not, the EEBC’s decisions are Final and Binding.

Therefore, the issue is no longer about disputed or contested territories, but rather, the issue has now become the illegal military occupation of sovereign Eritrean territories by Ethiopia and the solution is simple and clear. Ethiopia must remove its forces from sovereign Eritrean territories and it must stop establishing new settlements. The UN Security Council must enforce its own Charter and exercise its only mandate under the UN Charter, to act to restore peace & security. It is the sole UN organ responsible for the maintenance of regional and international peace and security, for enforcing the UN Charter, international law, its own resolutions as well as legal and binding arbitrations. Moreover, as stipulated in the Algiers Agreement, the UN Security Council has the mandate and mechanism to take punitive actions under Chapter VII against the belligerent party-in this case Ethiopia.

The issue is no longer the “primary responsibility” of the two governments. The issue also cannot be resolved through “dialogue”. Because the “contested” and “disputed” border issue has been legally resolved and the legal decisions have been unanimously endorsed by the UN Security Council, and because another disastrous war will definitely affect regional and international peace and security, it is the sole responsibility and obligation of the international community in general, and the UNSC in particular, to invoke take punitive actions under Chapter VII against Ethiopia for violating international law, and occupying sovereign Eritrean territories for over 13 years.

By invoking Chapter VII against Ethiopia, the international community can collectively avoid another regional disaster and salvage its fledgling credibility, integrity and efficacy on matters relating to peace stability and security in the 21st Century and beyond… Appeasing the minority regime will not lead to lasting peace or development in the region or normalization of relations between the two countries.

The rule of law must prevail over the law of the jungle!