13 April 2016 will mark the 14th anniversary of the Eritrea Ethiopia Boundary Commission’s (EEBC) final and binding delimitation decision and unfortunately, neither the UN Security Council, nor guarantors and witnesses to the Algiers Agreements, have mustered the political will to enforce the EEBC’s final and binding delimitation and demarcation decisions, emboldening the regime in Ethiopia to flout international law and continue with its belligerence stance-occupation of sovereign Eritrean territories, including Badme, the casus belli for the 1998-2000 border conflict to Eritrea, “unequivocally” awarded to Eritrea by the EEBC.

The ruling clique in Ethiopia and its handlers have gone to great lengths to render the decision “null and void” and it comes as no surprise to see the sudden mushrooming of “research” by infamous Ethiophyles, negating the Algiers Agreements and international law. The regime’s apologists have been presenting pseudo-academic papers in yet another desperate attempt to create an “alternative mechanism” to amend, revisit and reverse the final and binding decision of the Border Commission.

Suffice it to mention a couple of recent examples.

The following exact quotation is taken from two papers (identical)-authored by two individuals, Kieran E. Uchehara of Hasan Kalyoncu University, Gaziantep and Dima Noggo Sarbo of the Oxford-Princeton Global Leaders Fellowship program, said to be working as a policy analyst and consultant in Frankfurt, Germany. Sarbo’s 2013 paper, “The Ethiopia-Eritrea Conflict: Domestic and Regional Ramifications and the Role of the International Community”, and Uchehara’s 2014 paper “Understanding African Relationships: The Case of Eritrean Ethiopian Border Dispute”, both say:

“…The Algiers Agreement has stalled and is no longer the solution that it was thought to be. Furthermore, it must have been clearly recognised by all that the agreement and the subsequent decisions based on it were the wrong instruments for solving the conflict between the two states. Therefore, it is pertinent to look at the problem differently and find appropriate mechanisms that ensure a lasting solution for both states and peoples. As the real victims of the conflict, the citizens of both nations should be the beneficiaries of such a resolution and be involved in defining and managing the relations between them…”

Crocodile tears for a population that has long suffered because of such misrepresentation of the facts and history of these two brotherly people. The people of Eritrea and Ethiopia deserve to live in peace, within their own internationally recognized borders and they are the only ones that can speak about the suffering and destruction that has defined their lives for the last 100 years under ruthless Ethiopian rulers determined to squash Eritrea’s independence, with the acquiescence of the international community.

The UN Security Council endorsed the Algiers Agreement with this Statement:

“…The Security Council, reiterating its strong support for the Agreement of Cessation of Hostilities signed by the parties in Algiers on 18 June 2000 (S/2000/601), strongly welcomes and supports the subsequent Peace Agreement between the Government of the State of Eritrea and the Government of the Federal Democratic Republic of Ethiopia (S/2000/1183) signed in Algiers on 12 December 2000 (“Algiers Agreement”).  It commends the efforts of the Organization of African Unity, the President of Algeria and his Special Envoy, as well as the United States of America and the European Union for their role in achieving the Algiers Agreement…The Security Council encourages both parties to continue working towards the full and prompt implementation of the Algiers Agreements…The Security Council notes with satisfaction that the Algiers Agreement includes mechanisms for the delimitation and demarcation of the common border and for addressing claims and compensation, and that the parties are cooperating with the Secretary-General in these matters in accordance with agreed schedules…”

Its record since 2000 belies its stated intentions.

The UN Security Council-heavily influenced by the P3-UK, France and the United States, has not lived up to its moral and legal obligations under the said Agreement and the UN Charter, bringing to question its credibility, efficacy and integrity, not to mention relevance on issues relating to the two countries.

On 10 April 2002, just days before the Eritrea Ethiopia Boundary Commission delivered its decision on the Eritrea Ethiopia border, Kofi Annan, former UN Secretary General and Amara Essy, former Secretary-General of the Organization of African Unity (now African Union) wrote the following in an op-ed article published in the Canadian daily, The Globe and Mail:

“…We are about to reach an important milestone of the peace process. Having considered pertinent colonial treaties and applicable international law, as well as evidence provided by the two parties, the boundary commission will announce its decision on the delimitation of the border on Saturday…We salute the parties’ continued and consistent reaffirmation that they will accept the decision of the boundary commission as “final and binding,” as called for in the Algiers peace agreement. We take this as a clear manifestation of their desire for a final settlement and yearning for a lasting peace. The successful conclusion of the peace process on the basis of a legal settlement of the conflict will set an example for the rest of the African continent, and indeed the whole international community…Once the commission’s decision is known, it is imperative that the two countries implement it without delay…” 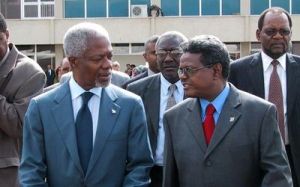 No other individual compromised the Algiers Agreements than Kofi Annan and his appeasement of the regime in Ethiopia, employing time buying gimmicks and ploys, and diverting the Security Council’s efforts by raising tangential issues, cost the people of Eritrea and Ethiopia time and opportunity to rebuild their lives. Knowing full well that the Security Council did/does not have any legal mandate to alter an agreement signed by two sovereign states, and knowing full well that the decision of the Eritrea Ethiopia Border Commission was final and binding, in his 23 October 2005 letter to the Security Council Annan wrote:

“…after years of frustrating stalemate, it would be imperative for the Security Council – as the principal organ entrusted with the primary responsibility for the maintenance of international peace and security – to address the underlying causes of the stalemate in the peace process, including those relating to the Ethiopian position on the decision of the Eritrea-Ethiopia Boundary Commission. The concerted and resolute action of the Council will be essential in bringing about the full implementation of the Algiers Agreements and restoring peace between the two countries…”

The underlying causes for the “stalemate”, which in reality is the occupation of sovereign Eritrean territories, is Ethiopia’s rejection of the final and binding EEBC delimitation And demarcation decisions and the acquiescence of the P3.

The “academic” onslaught today is geared towards undermining the EEBC and its decisions with it international law and the sanctity of treaties and agreements.

Jon Abbink who has authored several anti-Eritrea articles and books had this to say in yet another attempt to give the minority regime what it could not get on the battlefield, or the courtroom. In his paper, “LAW AGAINST REALITY? CONTEXTUALIZING THE ETHIOPIAN-ERITREAN BORDER PROBLEM”, he writes:

“…It is unfortunate that on account of its procedural aspects and its incomplete use of ‘applicable international law’ the EEBC, by order of the two parties that requested the arbitration as well as by its own volition, has sealed off the prospects for flexibility, amendment and compromise in the light of new information or interpretation. International law not taking into account clear facts and realities on the ground – both of a political and human nature, has little prospect of being implemented. Instead, certainly in the case of the Ethio-Eritrean boundary decision, its painstakingly developed, normative precepts will be in danger of being overruled by those realities…”

The Algiers Agreements is very clear on what the EEBC’s mandate. Article 4.2 says:

“…The parties agree that a neutral Boundary Commission composed of five members shall be established with a mandate to delimit and demarcate the colonial treaty border based on pertinent colonial treaties (1900, 1902 and 1908) and applicable international law. The Commission shall not have the power to make decisions ex aequo et bono…”

That means the EEBC was not to base its decisions on “realities on the ground”. No geographic or other considerations.

“…The OAU and the United Nations commit themselves to guarantee the respect for this commitment of the two Parties until the determination of the common border on the basis of pertinent colonial treaties and applicable international law… This guarantee shall be comprised of… measures to be taken by the international community should one or both of the Parties violate this commitment, including appropriate measures to be taken under Chapter VII of the United Nations Charter by the UN Security Council…”

If, as Abbink states in his paper, the EEBC decisions will have “little prospect of being implemented”, the onus will remain on the international community that guaranteed and witnessed the Algiers Agreements. Namely, the African Union, European Union, United Nations and the United States. The reputation of the above mentioned guarantors and witnesses to broker future agreements in the region and Africa, is also at stake…

The late Foreign Minister of Eritrea H.E. Ali Saed Abdella, sick and tired of Kofi Annan and the international community’s seemingly endless diplomatic gimmicks, made the following clear and eloquent statement while addressing the 59th Session of the General Assembly which stands true today:

“…Ethiopia’s belated rejection of the decision was an afterthought, which was done at first tentatively and cautiously but that later gained boldness and audacity when it realized that it can do so with impunity. The letter of the Prime Minister informing the United Nations Security Council that Ethiopia rejects the decision of the Boundary Commission was written sixteen full months after the decision was rendered. In a sense, Ethiopia’s rejection has more to do with the conduct of the international community rather than any intrinsic problem of the decision itself. Critical factors in Ethiopia’s rejection were the “sympathetic dispositions”, “the winks and nods” that were signaled by certain countries and some foreign missions in Ethiopia… In spite of Ethiopia’s violations of the Peace Agreement, major powers in the international community have not taken credible steps to persuade Ethiopia to uphold the rule of law and abide by its treaty obligations. On the contrary, Ethiopia continues to obtain massive humanitarian, economic and military support from major powers. Full-fledged economic sanctions may not even have been necessary. But the debt-cancellation, budgetary support and other substantial injections of economic and humanitarian support extended to Ethiopia have not been linked to positive performance in the peace process. So, as far as Eritrea is concerned, the problem is not Ethiopia’s bad faith conduct in the border dispute, but international acquiescence in its violations which has in turn encouraged its intransigence…”

As the people of Eritrea celebrate Eritrea’s 25th Independence Anniversary, they will record in their history, the travesty and injustice of the international system and will no doubt find their own mechanism for overcoming the injustices perpetrated by it, against them.

As for normalization of relations with Ethiopia…

If Cuddling of successive Ethiopian regimes as they committed untold crimes against their own people and the people of Eritrea is the “norm”, then only a fundamental change in the incoherent and racist policies for Horn of Africa and Eritrea and Ethiopia in particular, will advance peace. 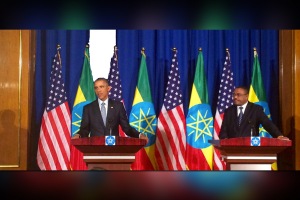 Continued appeasement of Ethiopia’s backward and lawless rulers will not…

This entry was posted in Uncategorized. Bookmark the permalink.

1 Response to Eritrea-Ethiopia: Respect for International Law, the Way Forward